Growing Up Catholic: The Pursuit of Truth 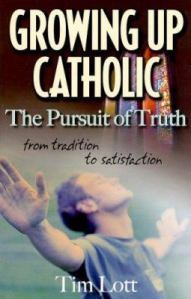 This book is an interesting testimony from ex-Catholic, Tim Lott. Lott grew up in the Catholic faith, receiving the sacraments and attempting to merit his way into Heaven by trying to obey the Ten Commandments, as his church taught. He married an evangelical Christian and began attending his wife’s church although still identifying as a Catholic. But when Lott began reading the Bible for the first time in his life, he discovered there were many differences between God’s Word and Catholicism. Over time, he was convicted of his sin by the Holy Spirit through Scripture and received Jesus Christ as his Savior by faith alone. Lott briefly examines some of the unbiblical beliefs of Catholicism including purgatory, confession of sins to a priest, praying to saints, worshipping Mary, and eucharistic transubstantiation and the sacrifice of the mass.

I enjoyed the author’s testimony. Lott is not a trained scholar so there are other books that do a much better job of critiquing Catholic theology, but I praise the Lord that he came out of religious error and accepted Christ as his Savior by faith. Especially interesting was his struggle regarding baptism. Most Catholics are baptized as infants. Catholicism teaches the sacramental waters actually wash away original sin and incorporate the infant candidate into the church. Lott’s evangelical church taught that baptism is not a sacrament that imparts any grace but that it’s a public profession of faith in Christ by an adult or a child old enough to fully understand the Gospel. Lott had been baptized as an infant, like most Catholics, and wrestled quite a bit with being baptized again after accepting Christ. I personally had a hard time relating to his struggle. I accepted Christ. I got baptized. No drama. But each believer’s journey is different.

For those who desire to read a thorough critique of Roman Catholicism in comparison to God’s Word, order The Gospel According to Rome by James G. McCarthy from Amazon.com. See here. For a list of over 300 books which compare Catholicism to God’s Word, see my Books tab here.

9 thoughts on “Growing up Catholic, turning to Jesus”