In 1870, prompted by a beleaguered pope Pius IX, the First Vatican Council declared as 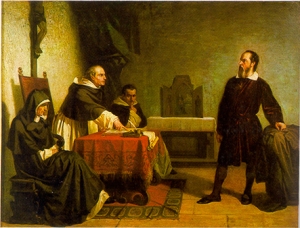 binding dogma that the pope is infallible when he “defines a doctrine concerning faith or morals to be held by the whole Church.” This doctrine of papal infallibility had many opponents within the church at the time and is problematic when attempting to reconcile an infallible papacy with its history. Popes have excommunicated previous popes. There were the bloody Crusades, the Inquisition, forced “conversions,” and the persecution of Jews and Protestants, all carried out with the approval and, oftentimes, at the instigation of the allegedly infallible popes. But perhaps one of the most clear-cut arguments against papal infallibility was the church’s condemnation of Galileo and his revolutionary theory of heliocentrism.

In the early 1600s, people believed the planets, sun, and stars revolved around the Earth based upon the ancient Ptolemaic geocentric model. A literal interpretation of the Bible (Joshua 10:12-14) also supported geocentrism. In 1616, Galileo’s theory of heliocentrism – that the Earth revolved around the Sun – was declared heretical by pope Paul V and the Inquisition because it seemingly contradicted Scripture. Galileo continued to challenge geocentrism so in 1633 yet another pope, Urban VIII, and the Inquisition once again condemned him. The scientist was consequently placed under house arrest until his death in 1642.

Four-hundred years later it’s universally accepted that the Earth revolves around the Sun. The two popes were dead wrong when they condemned Galileo. Today’s Catholic sophists try to exonerate the two popes by claiming the condemnations of Galileo were not done “ex cathedra,” as official papal declarations, but the controversy certainly did involve faith. We can see from our vantage point that the church’s ability to infallibly interpret Scripture was totally discredited by the two popes involved.

At least one contemporary Catholic apologist, Robert Sungenis, correctly recognizes that the question of papal infallibility is central to the Galileo affair. If Galileo was right, Sungenis says, then the popes proved themselves fallible by condemning him. So over the last several years Sungenis has gone about trying to prove that geocentrism is true and heliocentrism is false. You read that correctly! In 2009 Sungenis began writing a slew of books defending geocentrism. See here. Someone needs to inform NASA, the U.S. military, satellite providers, etc., that all of their celestial mechanical calculations based on the heliocentric model are incorrect!

There are many who would deride Sungenis but I give him credit for refusing to engage in sophistry when it comes to the Galileo affair and having the courage to stand behind his “infallible” popes. Sungenis was once one of the most prominent American Catholic apologists but his defense of geocentrism and his controversial viewpoints on Jews and the nation of Israel have relegated him to the fringe.