In the next year millions of Catholic pilgrims will pass through the “holy doors” at St. 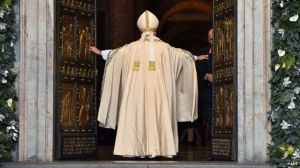 Peter’s Basilica. They have been told if they walk through the “holy doors” they will receive a “plenary indulgence” whereby all of the pending temporal punishment for their confessed sins up to that point will be removed.

Doors at cathedrals throughout the world have also been designated “holy doors” for those who can’t afford the airfare to Rome.

The “holy doors” will all be “closed” on November 20, 2016 and their “power” to remove temporal punishment will end.

But I have a few hypothetical questions for Catholics:

In the article below, the pope warns pilgrims to St. Peter’s “holy doors” to be wary of fraudsters. But who is going to warn them about the anti-Scriptural fraud of “holy doors,” indulgences, temporal punishment, and purgatory?

Accept Jesus Christ as your Savior. Religious traditions and superstition won’t save you.

“Therefore, since we have been justified by faith, we have peace with God through our Lord Jesus Christ.” – Romans 5:1

Praise God for His salvation by His grace through faith in Jesus Christ ALONE!

See my earlier post regarding the “holy doors” here.