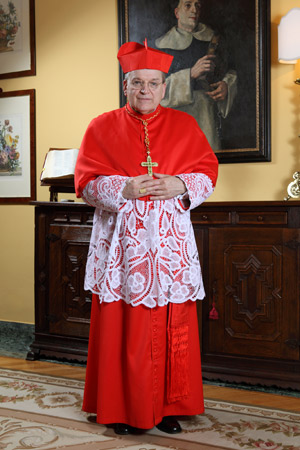 assumed the papacy, conservative Catholics are now beginning to wake up and smell the coffee. Francis threatens fundamentalist Catholicism with his push to soften the doctrines of the “unchangeable” church in an attempt to stanch the exodus of disaffected members (many to Jesus Christ and evangelicalism). Pictured is the leader of U.S. Catholic fundamentalists, Cardinal Raymond Burke.

Below are a few recent articles that articulate the growing dissatisfaction with Francis by the EWTN-types.

I praise the Lord for freeing from me from Catholic legalism, traditions, and ecclesiastical fratricide! Salvation is a free gift by God’s grace through faith in Jesus Christ alone!

“Jesus called them together and said, “You know that the rulers of the Gentiles lord it over them, and their high officials exercise authority over them. Not so with you. Instead, whoever wants to become great among you must be your servant, and whoever wants to be first must be your slave— just as the Son of Man did not come to be served, but to serve, and to give his life as a ransom for many.” – Matthew 20:25-28

The Year of Mercy Begins: An Open Letter to Pope Francis (A petition calling for Francis to resign) – 12/8/15