Catholics like to believe their church is the unchanging, “one true church,” but even a 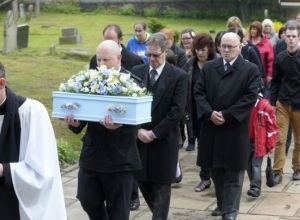 I’m currently reading “Catholicism Against Itself, Volume 2” (1965) by O. C. Lambert and there’s one bit of information I came across that I’d like to focus on.

We all know Catholics view baptism as the initial gateway to Heaven. It was once believed that if a person wasn’t baptized they couldn’t go to Heaven. Period. This belief extended to infants. Personnel at Catholic hospitals were instructed to go to great lengths to baptize all newborns who were in danger of dying.

You read that right. Babies who were not baptized were refused burial in “blessed” Catholic cemeteries.

These days the Catholic church no longer talks about limbo. It now states that it “hopes” all unbaptized infants will go to Heaven. – CCC 1261.

When did the change in church doctrine take place? Canon 1183 in the 1983 edition of Canon law replaces the no-burial-for-unbaptized-babies policy found in the 1917 Canon however the mourning family must still obtain the permission of the presiding bishop to bury their unbaptized dead child in a Catholic cemetery.

I shake my head in sadness for all the bereaving families who had to endure this grievous offense. Catholic bishops wouldn’t allow unbaptized infants to be buried in their cemeteries but they allowed pedophile priests and members of organized crime.

“For they bind heavy burdens and grievous to be borne, and lay them on men’s shoulders; but they themselves will not move them with one of their fingers.” – Matthew 23:4-5

“Jesus said, “Let the little children come to me, and do not hinder them, for the kingdom of heaven belongs to such as these.” – Matthew 19:14

“And he said: “Truly I tell you, unless you change and become like little children, you will never enter the kingdom of heaven.” – Matthew 18:3

The Gospel – salvation by God’s grace through accepting Christ as Savior by faith – is so simple even a child can understand, unlike the mile-long, legal laundry list, one-year RCIA indoctrination that Catholicism imposes. There’s no salvation in trying to obey your way to Heaven.

“Therefore no one will be declared righteous in God’s sight by the works of the law; rather, through the law we become conscious of our sin. But now apart from the law the righteousness of God has been made known, to which the Law and the Prophets testify. This righteousness is given through faith in Jesus Christ to all who believe.” – Romans 3:20-22