A Christian’s Pocket Guide To The Papacy: Its origin and role in the 21st century 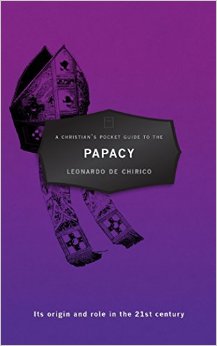 This small book examines the development of the papacy in Catholic history with a chapter especially devoted to recent popes, John Paul II, Benedict XVI, and Francis.

As early Christianity gradually displaced paganism as the official religion of the Roman Empire it adapted many of the beliefs, practices, and rituals of its rival. When the imperial seat transferred to Constantinople, the bishop of Rome became the de facto emperor of the West. The papacy patterned itself on the imperial model and sought to become the most powerful ecclesiastical and political authority in the world.

Dr. De Chirico provides many valuable insights into the history of the papacy and its possible future prospects especially in light of the growing secularization of the West combined with the relentless march of ecumenism. There is no doubt the papacy is planning for all possible eventualities.

Every Evangelical pastor needs to read this book and everyone who loves Jesus Christ and the Gospel of grace would benefit from it as well. A Christian’s Pocket Guide To The Papacy can be ordered from Amazon.com.