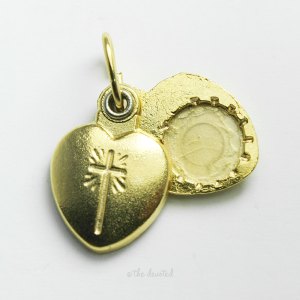 water, the scapular, the rosary, and the “saint” Christopher medal. According to the Baltimore Catechism, sacramentals are “anything set apart or blessed by the Church to excite good thoughts and to increase devotion, and through these movements of the heart to remit venial sin.”

Let’s now look at a once very popular sacramental that has fallen a bit out of favor; the Agnus Dei. The Agnus Dei (Latin for “Lamb of God”) is a piece of beeswax taken from a paschal candle blessed by the pope and used previously at the Basilica of St. Peter or in the papal chapels that has been embossed with an image of a lamb bearing a cross or pennant. It is usually encased in a small locket and worn around the neck. Catholic vendors claim those who carry or venerate the blessed Agnus Dei are promised protection from “tempests, lighting, fire, water, malice of demons, adversity, pestilence, sickness, and sudden death.” It also allegedly protects “women bearing children that they may be preserved from all harm and are favored with a happy delivery.”

Church tradition has the Agnus Dei sacramental making its first appearance in the 5th-century, making it one of the oldest of the church’s sacramentals. But there’s actually no written record of the Agnus Dei until the 9th-century. Catholic apologists readily admit the Agnus Dei was a “christianized” replacement for pagan charms and amulets “from which the ruder populace were weaned by the enjoyment of this Christian substitute blessed by prayer.”

The Agnus Dei, like the church’s other sacramentals, is essentially a Catholic rabbit’s foot, allegedly warding off evil and eliciting good fortune.

Relatively few Catholics read the Bible but if they did they might be surprised that there is absolutely no mention of Jesus or His followers ever using religious charms or talismans. Neither were amulets used by the faithful Israelites of the Old Testament. Rather, such objects were always linked to pagan sorcery. As early Christianity transitioned into the institutionalized, official state religion of the Roman Empire it adopted many of the practices of the pagan religion which preceded it. Simple faith in Jesus Christ devolved into ritualism and legalism, all tightly controlled by an increasingly powerful hierarchy.

Can any believer who knows God’s Word with any degree of intimacy possibly imagine the Jesus of the Gospels passing out “blessed” charms and amulets to His followers? Thank you, Father, for freeing me from religious superstition and saving me by Your grace through faith in Jesus Christ alone! Accept Jesus Christ as your Savior and seek out an Evangelical church where the Gospel of grace is preached.

“When you enter the land the Lord your God is giving you, do not learn to imitate the detestable ways of the nations there. Let no one be found among you who sacrifices their son or daughter in the fire, who practices divination or sorcery, interprets omens, engages in witchcraft, or casts spells, or who is a medium or spiritist or who consults the dead. Anyone who does these things is detestable to the Lord; because of these same detestable practices the Lord your God will drive out those nations before you.” – Deuteronomy 18: 9-12