I do not set aside the grace of God, for if righteousness could be gained through the law, 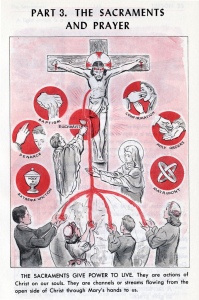 I attended Catholic grammar school in the 1960s and was taught by the nuns from the very popular children’s catechism, The New Saint Joseph Baltimore Catechism (No. 2) by “Father” Joseph Bennet Kelley (1920-1997). This book taught 6th, 7th, and 8th graders the basics of Catholic legalism. The overarching theology is that salvation comes through the church and its clergy-administered sacraments and by obedience to the Ten Commandments and church rules. Although Catholics claim their religion is based on God’s grace it’s ultimately a legalistic system of merit and works-righteousness. In 1983, I came to understand through the Bible that salvation is a gift of God by His grace through faith in Jesus Christ alone and I accepted Christ as my Savior. I couldn’t possibly ever earn my salvation. Thankfully my Savior paid the entire debt for me on the cross at Calvary.

“And if by grace, then it cannot be based on works; if it were, grace would no longer be grace” – Romans 11:6.

Re-reading this book of ritualistic do’s and don’ts was an arduous chore akin to a slow walk through the Mojave Desert at high noon. Evangelicals would be amazed by how much emphasis is given to Mary and how Catholicism elevates her to semi-deity in her roles as mediatrix and co-redemptrix. The doctrines regarding priests as essential mediators between God and humankind are anti-scriptural inventions designed to keep the laity utterly dependent on the clergy. In fact, most of the material in this book is anti-Biblical. The white-bread, Beaver Cleaver-era illustrations would be an absolute hoot if the salvation-by-merit doctrines they affirm weren’t so damningly erroneous.

It saddens me to think of the millions of Catholic children who were misled by this book into impossibly trying to establish their own righteousness before God rather than accepting His free gift of salvation through Jesus Christ.

The Catholic church boasts that it never changes but Catholicism used to teach ONLY baptized Catholics who were in union with the pope had a chance to go to Heaven. Now they teach every person who tries to lead a “good” life according to the knowledge they’ve been given will merit Heaven, EVEN ATHEISTS. Yet the Bible teaches there are none who are “good” and that everyone needs to accept Christ the Savior.