Catholic tradition teaches that the “Blessed Virgin Mary” appeared to “Saint” Simon Stock, a friar of the Carmelite Order, in Cambridge, England in 1251 and “recommended” the Brown Scapular to him. Purportedly Mary promi 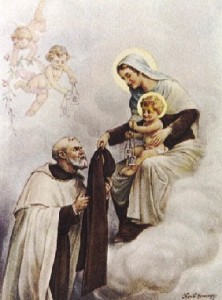 sed that “whoever dies clothed in this habit (scapular) shall not suffer the fires of Hell.” Supposedly Pope John XXII (1244-1334) ratified this promise with the apocryphal “Sabbatine Privilege.” Seeking to gain the advantages of the promise without having to wear the cumbersome Carmelite apron, supporters created a convenient “devotional” version consisting of two small pieces of brown cloth joined together by two bands and worn over the shoulders.

The scapular sacramental represents another example of Catholic superstition. Rather than repenting of their sins and accepting Jesus Christ as their Savior, Catholics place their hope in objects and ritual. They think that wearing this pagan good luck charm will earn them a place in Heaven. I can remember scapulars being left around the house by my sisters as I was growing up although I never wore one. The nuns often passed them out at parochial school. However, there’s no doubt that the wearing of scapulars among Catholics has decreased in popularity since those times.

One thought on “Scapulars and the “Sabbatine Privilege””